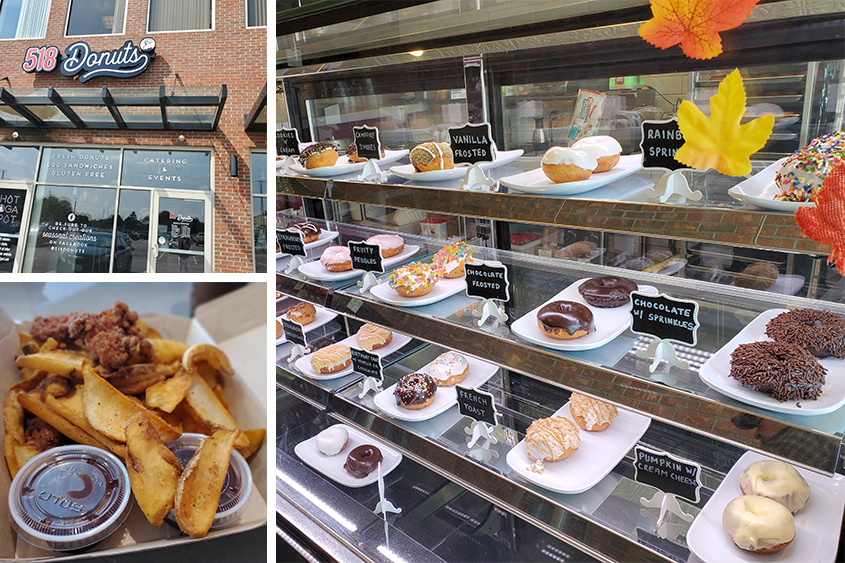 CLIFTON PARK — Fancy donuts had their 15 minutes of fame – and they’re still going.

I’m not talking about Entenmann’s variety box, orchard cider donut or even the excellent bakeries available at Schuyler in Watervliet or Bella Napoli. And, you know, Dunkin’.

I thought I knew everything there was to know about donuts until donut shops started popping up in our area with their maple bacons, limes, and cremes brulee.

Flash in the pan, I thought. Then I went to a wedding, and instead of cake, the happy couple opted for – you guessed it – donuts.

Times are changing and now I am the dinosaur. Fancy donuts are here to stay. With that in mind, I asked Sheryl, who loves fancy donuts, to come with me to 518 Donuts in Clifton Park. It opened at the end of 2021.

They added another, in downtown Troy in August this year, which has outdoor seating. When it’s open it gets busy, but the staff have been a problem. Hope they fixed this.

So, it’s donuts and fried chicken. I don’t think you’re supposed to eat them together, like chicken and waffles, but you can have them in a sandwich box.

They also have breakfast sandwiches. An egg and cheese sandwich is $4; add a little more for bacon and sausages. And you can get it on a gluten-free bun.

Their online menu for the Clifton Park store lists five types of fried chicken sandwich boxes, including the Federal ($17), with pickles, 518 spicy sauce and American cheese. The boxes include the sandwich, fries and a plain donut.

The menus at both locations list 13 popular donut flavors, available all the time, though some come and go depending on the season. They range from the chocolate frosted pedestrian to the more unusual French toast and strawberry cheesecake. Prices are $2.50 for one, $12 for six, and $22 for a dozen.

There are gluten-free donuts for just a little more.

There were over 13 kinds of donuts, which by the way are all of the cake type, in the case of the Clifton Park store when we visited. They were beautifully presented on white china plates and under LED lights, a display that wouldn’t be out of place in a high-end department store – except they were donuts, not jewelry.

The store is bright and cheerful, with a bay window overlooking the parking lot. The walls are tiled and everything looks immaculate.

The fried chicken is also gluten free and they have a dedicated gluten free fryer. The regular donuts are made entirely by the donut robot at the front of the store, so the kitchen at the back is completely gluten-free.

So we went to taste donuts and fried chicken. A sandwich board showed specials, including $3 off a nine-piece nugget combo. This is what I ordered; 518 also offers promotions on other days of the week.

But wait: they only serve breakfast until 11 and you can’t get chicken until 11. We showed up just before 11 and got both.

Sheryl started with a bacon, egg and cheese sandwich on a hard roll ($5) before 11 I had a rainbow frosted vanilla donut.

We each took a stool from a counter along the wall, across from where all business is transacted. Help yourself to towels and accessories at the station in front.

I cut the donut into pieces and plucked out the pieces that came off in the process. The glued rainbow vanilla frosting sprinkles the whole thing, very soft but pleasant. I could taste the nuggets, which have a mild flavor that I enjoy.

Sheryl passed a piece of sandwich, the part with the bacon hanging out, because she’s a good friend. I liked how the egg was partly scrambled and the bacon was well cooked, but not as salty or smoky as I would like. The hard roll, topped with cornmeal, belied its name by being soft, even the crispy part. I could smell the black pepper, which I liked.

Your standard egg sandwich, then. Sheryl enjoyed it and it was freshly made. You can get a gluten-free roll for a bit more.

After 11 we each ordered a nugget special ($14), mine with BBQ sauce and Sheryl’s with hot sauce. We opened our compostable brown boxes and admired the golden fries and nubby nuggets.

The nuggets were addictive, with great flavor and lots of super-duper crispy coating. The chicken was real white meat, juicy and tender.

The hot sauce tasted like a mix of mayonnaise and Frank’s hot sauce, Sheryl said. I barbecued; there is also the ranch and spicy 518 sauce.

We both really liked the nuggets, although I found the coating to be a little too crispy. Sheryl disagreed.

“There’s a lot of coating, but it’s nice and crispy throughout, not mushy inside,” she explained. I think the amount of coating would be better suited to a sandwich sized piece of chicken, providing a better crust to meat ratio.

The coating is gluten free and I couldn’t tell you what it’s made of, but it’s seasoned and tastes great. Online I found recipes for fried chicken with gluten free all purpose flour, so maybe that’s what it is.

The helpful person at the counter told us the chicken was frozen and asked how we liked it. I made the very juicy argument, Sheryl on the other side. The steadfast employee thoughtfully replied that she would play around with cooking times to achieve optimal crispiness.

The place makes a big deal out of its chicken and donuts, but it should mention the fries, because they are amazing.

They are called french fries and are thin slices of russet potato with skin on, deep fried and seasoned with salt, pepper and paprika. Some are so thin they are fleas; all are delicious. The shape helps people pick up sauces.

Eric only had the part of the vanilla sprinkled donut that I didn’t finish because I forgot to bring him one. Whoops.

Our breakfast/lunch total came to $24.61 including a cold brew coffee for Sheryl which she said was very good.

A fancy donut authority, she gave 518 Donuts a thumbs up. We both enjoyed the chicken and fries. The employees were friendly and helpful.

The locally owned and operated 518 Donut supports the local baseball team and on October 28 will offer free coffee and a donut to first responders.

So the next time you crave a fancy donut and chicken, try these.

Caroline Lee is a freelance writer living in Troy. Join her at [email protected].

More from The Daily Gazette: