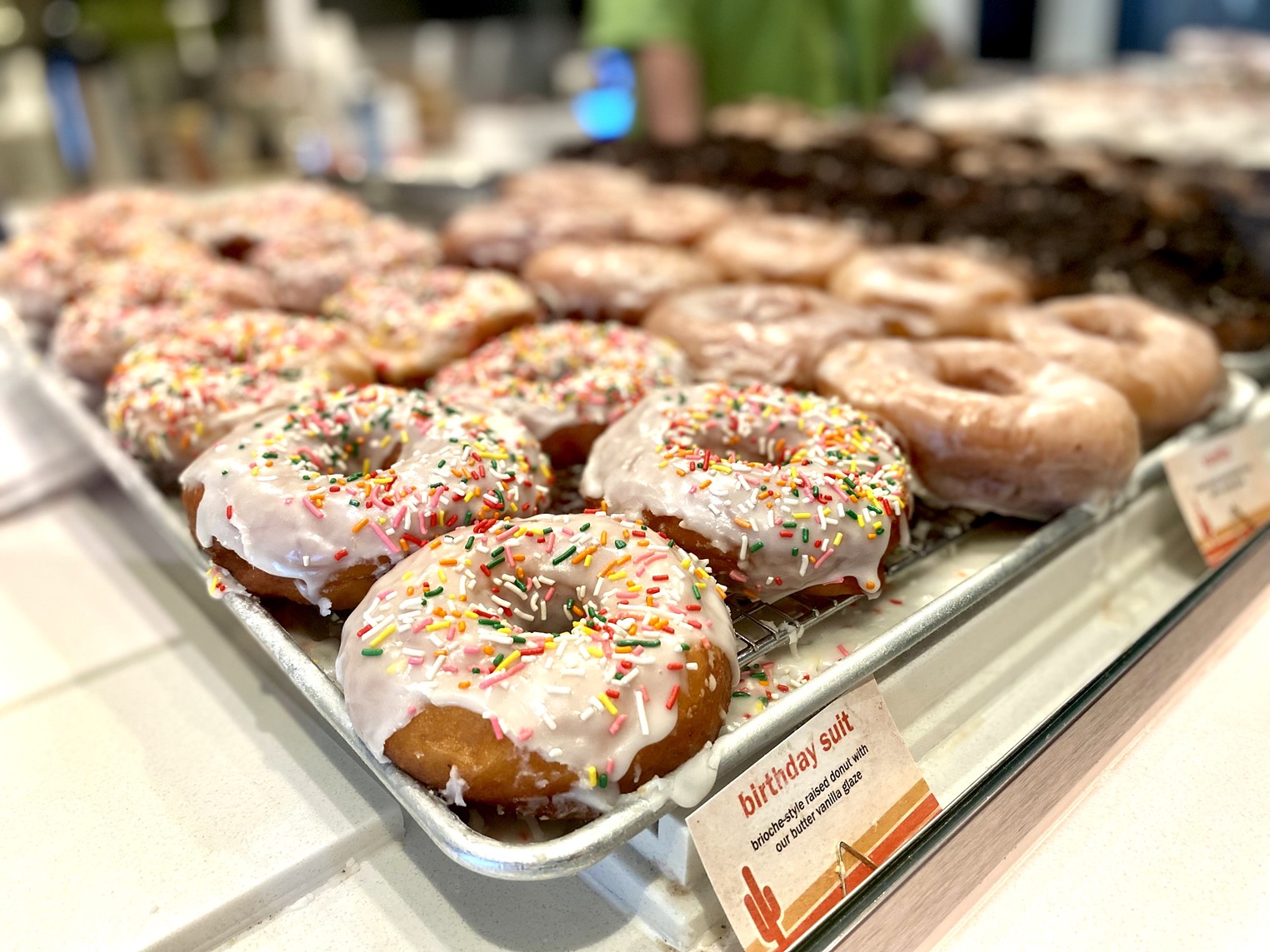 The 12 Best Donuts in Metro Phoenix

There are donuts, like in the convenience store genre, and then there are donuts — as in sweet rings of soft, golden, deep-fried dough.

Well, making donuts in the valley just got a whole lot more fun thanks to an influx of ingenious flavors and donut vendors who aren’t afraid to think outside the box.

Not that we’re hitting apple fritters (like!), but with crème brûlée and custard-filled malasadas calling your name, the Valley is raising its donut game.

A touch of ultraviolet violet emerges from the ube malasadas.

Hapa Food Co.’s malasadas in Mesa are a revelation. The little round yeast doughnuts, a fried favorite in Hawaii, are made to order and come out warm and coated in just the right amount of sugar of course. They are filled with custards flavored with coconut, passion fruit, banana and, most eye-catching of all, purple ube. One bite simultaneously delivers an explosion of light, fluffy batter as well as rich, creamy custard for a textural journey as fun as a trip to Hawaii itself. They are selling out, so pre-order your dozen to avoid disappointment.

Chin Up’s Everything Bagel Donut is everything you imagined.

Everything Bagel Donut at Chin Up Donuts + Café

Chin Up Donuts + Coffee is not your ordinary neighborhood donut shop. Here, owner Alex McEntire thinks outside the box and goes way beyond standard watering. Instead, you’ll find magical brioche donut mashups that will make you both “Hmmm?” and “Mmmmm.” Combos include Sriracha frosting topped with red pepper flakes, a donut stuffed with macaroni and cheese and covered in cheese sauce frosting, and the famous Everything Bagel donut, a real sweet-and-salty seductress that somehow transforms the seeds sesame, onion and garlic into a melt-in-your-mouth donut wonder.

SoJo’s Donuts serves up decadent raised donuts that also happen to be vegan in a cute shop, with pastel pink and blue walls and a too-cute kitten logo. Maple Glaze flavor is topped with homemade rice paper bacon, Boston cream is filled with creamy coconut milk custard, S’mores come with homemade toasted marshmallows and coconut crumble graham crackers, and the fan-favorite strawberry shortcake is coated in frosting made with real strawberries and vanilla cake crumbs. Chewy, playful and pretty, SoJo’s donuts prove that plants don’t have to sacrifice indulgence.

Yes, those are real blueberries on the Blueberry Fritter.

The Original Rainbow Donuts is just that, a self-contained OG North Phoenix family business that has been growing since the 90s. In other words, it’s not just any Rainbow Donuts. The regular donut case won’t disappoint, but their top-tier treats are the holy grail. Bestsellers include maple bacon behemoths crowned with two slices of crispy bacon, twisted chocolate tiger tails that could feed a family of four, and a fabulous selection of donuts, all steep with a sugar coating. and stuffed with fresh apples, blueberries and cherries. Open daily from 4 a.m. to 2 p.m., they often sell out before noon.

Black and blue and yum!

Rollover Donuts owners Brad and Kat Moore don’t make boring donuts. Instead of the plain old donut batter, they use hand-rolled brioche – a richer, sweeter base thanks to extra eggs and butter. Then there is programming. Sure, Short Leash Hotdogs + Rollover Donuts has the sprinkled variety, but also Spicy Thai Coconut, Triple Chocolate, and an alcohol-filled donut for those over 21. But it was the Black and Blue that left us with weak knees. That sweet batter paired with the tangy punch of the jam filling paired with the gritty crispness of the dish, the lavender finishing sugar is an opposite that draws the attack of taste and texture. Your only defense: Close your eyes and savor the onslaught.

The apple donut at Beyond Donuts & Café.

Apple donut at Beyond Donuts & Café

You haven’t tried an apple fritter until you’ve tried this apple fritter, a shiny, glorious gem of fried perfection. It was created by Beyond Donuts & Café owner Seath Duk, a real donut guy with 20 years of experience under his kitchen apron. This blurb is a love note to you. Your donut is a bomb – all the peaks and valleys and frosting for days with just the right apple flavor to cut through the candy. But it’s the dough we love with these chewy balls of frozen goodness that somehow get better with every bite. So thank you Fritter Man, and keep the magic going.

No need to worry, you will be very happy after inhaling this donut at Donut Worry Coffee & Smoothies. It’s the kind of back-to-basics buttermilk that will make you forget about all those hip donut dressings that usually involve bacon, so you can go back to a well-done OG donut. Slightly tangy, perfectly crispy, all steep and crunchy on the outside and chewy on the inside. The frying oil penetrates just enough into the batter to make it crispy, gooey and so soft. Bonus: The weekend means custom-filled malasadas in flavors like raspberry, apple, Boston cream, and guava.

Crème brûlée at The Local Donut

Crème brûlée is a solid dessert, which even makes you sigh if it’s done well. But this donut. This donut! By adding fried dough, glazed goodness and caramelization to the mix, crème brûlée enters another dimension at The Local Donut. Let’s start with the filling – a creamy creation that infuses the batter with a pudding-like consistency. Not that this donut is all gooey. The architecture of the exterior is spongy but solid with a sugar glaze, lightly flamed and topped with a perfect raspberry. A little makes you go from hard to soft, to “oh my God”.

With locations throughout the Valley, BoSa is a Phoenix favorite.

Ask your friends for their favorite donut, and there’s no doubt that BoSa Donuts will be high with the fandom and fury usually reserved for football. We understood. It’s a local chain with a ton of locations, and you can totally go in your pajamas at midnight thanks to the 24-hour drive-thru. It’s a real institution in the Valley, but is there one flavor that stands out from the others? Yes, it’s buttermilk… no, wait, it’s honey cruller. In fact, can we change that to coconut crumbs?

Everything is a winner at the Donut Parlor.

Everything at the Donut Parlor

Donut Parlor has a bone to pick with all those ordinary donuts. You know, the ones that are so coated in sweetness, and all you can taste is fat and sugar. Owner Chhaya Tan’s fried creations are much more nuanced than that. Instead of the usual donut batter, Chhaya lets it rise not once, not three times, but four times to create a barrier so fat from the deep fryer doesn’t just soak in and take over. That means the real ingredients have a chance to sing, like baked apples and cinnamon sugar crumbs on the Apple Pie donut. Picking just one is like picking a favorite kid — nearly impossible — but when half a dozen are just $8.99, luckily you don’t have to.

Coconut cream is a dream at Dutch Donut Factory.

The “Best Donuts In Town” written on the window of Dutch Donut Factory is the first sign. The regulars who order a dozen to go but don’t come out until they’ve shot at least two are the second. Yes, you’re in store for something special and a bite of coconut cream proves it. Balance is the name of the game here. This puffy, light, yeasty delight offers just the right ratio of toasted filling, chewy, icy sweetness and creamy filling to ensure your taste buds get a multi-layered treat.

At first glance, this local donut hole looks like everything else. It’s in a mall, he sells dozens of them in pink boxes, and he makes boba tea. Pretty standard. But look closer and the deal is a cut above Lucky Donuts. Rattlesnakes are perfectly coiled, crullers expertly dipped, and nuggets evenly dispersed. But it was the Red Velvet that really stole our hearts. It’s a cakey cut above, all moist and crumbly with just the right amount of frosting – simply delicious and totally dunkable.