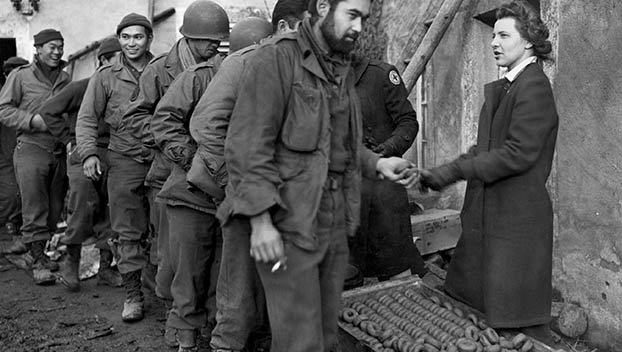 Fannye Beaty was just an average small-town girl until the start of World War II.

She was born in Orange. After high school, she graduated from Mary Hardin Baylor College in Belton, Texas. She had been a physical education instructor at Huntsville High School in Huntsville and also at Daisetta High School in Daisetta, Texas.

She returned to Orange and became Director of WPA Recreation at Orange. When World War II began, she joined the American Red Cross and asked to go overseas. Her application was accepted and she became Deputy Program Director in the Military and Naval Welfare Service of the North African Zone.

On March 19, 1943, she arrived in Oran, North Africa. She became a member of a four-woman squad attached to the 88th Infantry Division. Nicknamed the “Blue Devils”, they were a support division of the 5th Army.

The commanding general, General John E. Sloan, was not happy to have four women attached to his division. Later, he became one of their biggest supporters.

The women came from four different parts of America but had a lot in common, primarily a desire to help keep the boys’ morale up in battle in any way possible. They discovered that the main job was to cook donuts.

The War Relief Shop at the American Red Cross in New Canaan, Connecticut donated a new Dodge Clubmobile to the Red Cross for use by support teams. It was a vehicle similar to an SUV today. There was room for the supplies needed to cook donuts, make coffee, and have room for things like a victrola, records, magazines (when they could find some) and the occasional musical instruments that they might find along the way.

Beaty and the three other young women accompanied the 88th Division from North Africa to Sicily and then through Italy to join and be part of the European campaign. She wrote letters to her family in Orange and gave as much detail as the censors allowed.

Beaty wrote that she learned to take a bath using only the amount of water her combat helmet could hold. She wrote that they were often covered in a thick layer of dust, encountered rain, and then were covered in mud when the rain hit them.

They ate what the troops ate and slept in tents like the troops. Occasionally they would find sleeping quarters in a house. Their concern was to take care of the soldiers who became “our boys”. Troops appreciated the ladies being with them, caring for them and protecting them. Beaty once remarked years after the war that none of the men had been disrespectful and that “nothing out of the ordinary was ever tried. They treated us like the girls next door.

After a few months, they were given a gun rack to use with the clubmobile. It was a big help because now they could carry more supplies. Later, they got a trailer that could carry a portable kitchen where they cooked the donuts. They had to carry a quantity of donut flour and lard for cooking. They were amazed that donuts were so popular with the troops.

“There’s no way of knowing how many thousands of donuts we baked in the three years we were together,” Beaty said after the war.

She wrote on February 21, 1944 that she was in Naples and that they had been given a house to use while there and had taken her first bath in a year.

In September 1944, Beaty was able to return home for a vacation. While at Orange, one of her daughters wrote to her and told her that the 88th had been in fierce combat in the Apennines.

“Don’t believe what you may read in the papers, it was far worse than what they will report,” the letter read. Upon her return, she found that it had indeed been wrong, and she discovered that some of “her boys” were no longer with them.

In January 1945, they are in Montecatini and the division takes over three hotels. She wrote home that they were in a resort “like Hot Springs (Arkansas)”. They found tables, chairs, found a piano, hired an orchestra, scrounged up “other things” and opened “The Blue Devils Juke Joint”.

Germany surrendered in May 1945. Beaty wrote: “The Red Cross is frozen here until all GIs go home who deserve to go, which is only fair.

During her stay in Europe, after the end of the war, she was able to travel. One of the places she went to was Dachau, the infamous concentration camp. She was deeply moved by what she saw.

After three years abroad, hundreds of miles in all conditions, being only about two miles from the front lines and baking thousands of donuts, Beaty returned from Naples, Italy on September 25, 1945.

Her mother kept all the letters she wrote abroad. In 1999, she co-wrote with Linda Ferris, a book about her experiences. Italy, Through the Hole of a Donut is a unique account of her experiences as “Doughnut Dollie”.