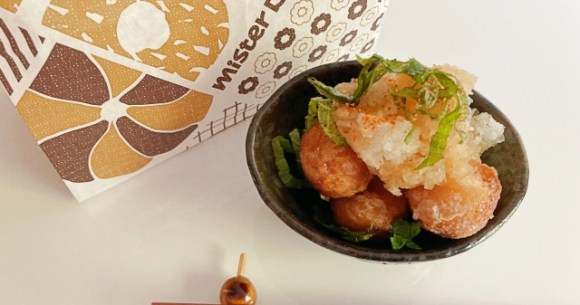 The official recipe makes us question everything we thought we knew about Japanese cuisine.

Since the pandemic, more and more people are ordering takeout and preparing meals at home. A number of fast food chains have pivoted to respond to this trend, offering hacks and recipes to modify their takeaways, and now Mister Donut is joining the craze with a new recipe for…Agedashi Donuts.

If the name sounds familiar, that’s because it implies Agedashi, which means “lightly fried” but is commonly associated with Agedashi tofu, a popular deep-fried tofu dish. Agedashi Tofu (pronounced “Agedashi Dofu”) is known for its sweet and salty sticky sauce, which goes wonderfully with the thick fried batter that envelops the soft tofu, but how would that work with a donut instead of tofu?

We decided to find out by trying Mister Donut’s unusual recipe, which calls for the following ingredients for one serving:

We gathered all the ingredients together, except for the mitsuba, which we couldn’t find at the store, so we used green shiso leaves instead, and went through the four-step preparation process.

Step 1: Separate the Pon de Ring into individual balls and sprinkle them with potato starch.

2nd step: Fry briefly in oil at 180 degrees Celsius and place on a paper towel to drain.

Step 3: Place in a bowl and garnish with grated radish and grated mitsuba.

Step 4: Pour the mentuyu on top and add the shichimi seasoning and voila!

As you’ve probably noticed, frying the donut pieces makes them fried twice, which adds to the calories, but also to the taste. Our first bite was tentative, as we wondered what this fusion of flavors would bring, but the result was surprisingly delicious!

▼ The double frying method makes them soft on the inside and extra crispy on the outside.

Potato starch gave donuts the same sticky coating as tofu ageshi, which made them taste familiar, but totally different at the same time. The combination of freshly grated daikon radish, fragrant green shiso, savory noodle broth and spicy shichimi helped decrease the sweetness of the donut and bring it towards the salty spectrumcreating a harmonious blend of flavors.

▼ Check out the official recipe video below:

We never thought we’d say this, but if you’re able to get your hands on a donut and the ingredients above, we highly recommend giving it a try! It’s an unforgettable accompaniment that tantalizes the taste buds while confusing the mind, a bit like these imitation octopus dumplings made with hard-boiled eggs!

Photos © SoraNews24
● Want to be up to date with the latest articles from SoraNews24 as soon as they are published? Follow us on Facebook and Twitter!
[ Read in Japanese ]