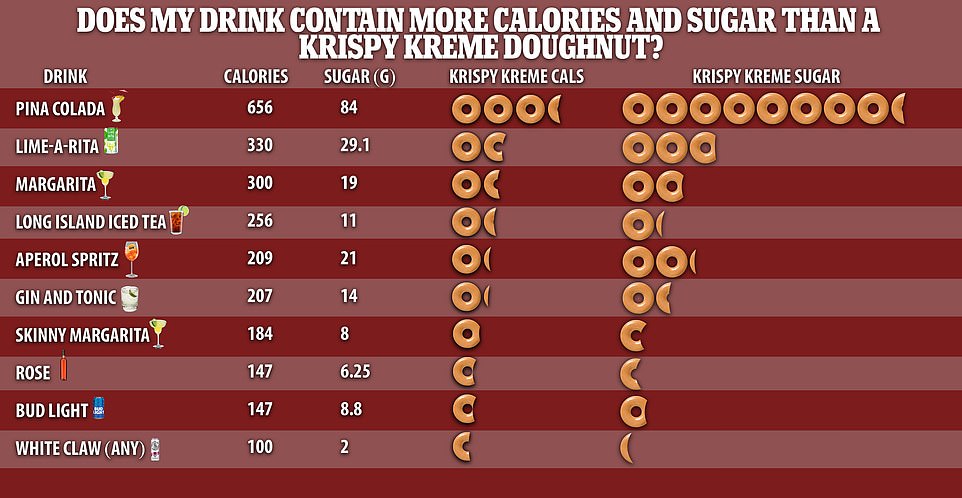 A single glass of pina colada contains as much sugar as eight Krispy Kreme glazed donuts or six Reese’s peanut butter cupcakes, health statistics reveal, while a margarita contains as many calories as two cans of coke.

DailyMail.com analyzed the calorie and sugar content of more than 20 popular cocktails and summer drinks from dietician’s website Nutritionix – which claims to be the world’s largest nutrition database – and official sources.

It showed that a pina colada is by far the highest calorie and highest sugar cocktail available, with around 650 calories – the equivalent of a Big Mac – and 84 grams of sugar in just one glass.

But a Bud Light Lime-A-Rita – a margarita plus a lime-flavored beer – came in second with almost twice the calories of a 190-calorie glazed donut, while a typical margarita came in third with calories equivalent to two Cans of Coke of 139 calories.

Dr. Leah Kaufman, a registered dietitian at NYU Langone, told DailyMail.com that the cocktails contain so many calories because of the sugary syrups used to make them.

The alcohol content in the drinks also increased the calorie count, she warned, but even drinking non-alcoholic versions wouldn’t drastically reduce the total.

A pina colada has as much sugar as eight Krispy Kreme glazed donuts, while a margarita has as many calories as two cans of coke.

Nutritionix’s database is based on information from the United States Department of Agriculture, which keeps a tab on the nutrition labels of foods and beverages sold in the country.

It also includes data from manufacturers and restaurants on the number of calories and the amount of sugar and other substances contained in a product.

Their data showed a pina coladas calorie count followed by Lime-A-Rita with 330 calories in a can and about 30 grams of sugar. In the classic margarita, there were up to 300 calories as well as 19 grams of sugar.

A frozen strawberry daiquiri was the fourth-highest-calorie drink included in the analysis, which also had about 300 calories per glass and 27 grams more sugar.

At the other end of the scale were White Claw seltzers with each flavor – including blackberry, blood orange and strawberry – containing around 100 calories and two grams of sugar.

Other popular drinks on the list include Long Island Iced Tea (260 calories, 11 grams of sugar), which has one calorie equivalent to nearly two cans of Coke.

When asked why pina coladas and margaritas have such a high calorie count, Dr. Kaufman replied, “It’s probably because of the sugar.” There’s also agave in there, but it’s pure sugar.

“Alcohol, certainly, also contributes and mixers are also going to have sugar. Pina Colada has coconut and that adds too.

She also said, “Although these drinks can be refreshing in the summer, they are very high in sugar.”

When asked how to make a low-calorie cocktail, she recommended mixing any clear liquor such as tequila with seltzer water or sparkling water.

She added that it may also be better to squeeze fresh fruit into it rather than using fruit juice, which has a lot of added sugar.

British doctors warn that alcohol is high in calories because it’s made from natural starch and sugar through a process called fermentation – when yeast breaks down sugars in the absence of oxygen.

It can contain about seven calories per gram, almost as much as a piece of chocolate.

American adults consume about 77 grams of sugar a day, which is equivalent to six 10-pound bowling balls each year.

But the US Department of Health and Human Services dietary guidelines state that women should consume no more than 50 grams of sugar per day, while men should avoid consuming more than 62.5 grams.

Consuming more sugar than that on a regular basis could damage the heart, says the American Heart Association, because it increases a person’s risk of being overweight or obese, a key risk factor for the disease.

It also puts higher pressure on the liver, leading to an increased risk of fat accumulation which could also trigger type 2 diabetes.

Harvard University scientists say eating too much sugar could also increase someone’s blood pressure and inflammation in their body.

Mississippi is the fattest place in America, followed by West Virginia and Alabama, according to figures

The map above shows the proportion of obese people by state. The highest rates were in Mississippi, West Virginia and Alabama

Mississippi is the fattest state in America, with two in five adults obese or morbidly obese, a report revealed Tuesday amid growing warnings about the nation’s health.

At the other end of the scale, people in Colorado, Massachusetts and Hawaii were the least likely to be obese, with less than a quarter of adults falling into this category.

Experts have blamed poor diets, reduced access to public spaces for exercise, and low health insurance coverage in some areas for the obesity crisis, particularly in Mississippi.

The figures come from a report by NiceRx – an online pharmacy – and are based on figures collected by the Centers for Disease Control and Prevention (CDC) for the year 2020.

President Joe Biden will unveil his plans to tackle obesity in September and has already set targets for improving physical activity and reducing diet-related diseases – such as type 2 diabetes – at the national scale.