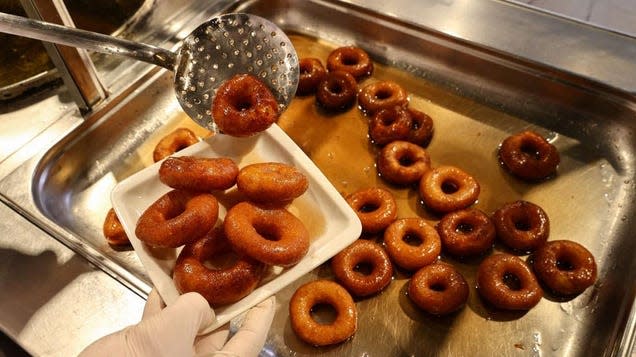 The world’s first donuts (and where to find them)

If you’re looking for the best donut in the world, you’ll be suffocating under an avalanche of suitors (and arguments). But if you’re looking for the world first donut, just look at the Greeks. That goes without saying, because they invented many of Western civilization’s greatest contributions to humanity, but loukoumades– let’s call them Greek donuts – take it to a whole new level. Sometimes without any holes.

While hot buns are synonymous with Easter, those celebrating Greek Easter (most often falling on a different date) slash loukoumades. (It’s not that they would turn down a melopita, aka honey tart, or the honey cookies known as melomakarona.) Loukoumades are enjoyed year-round, but Easter is high season for sweets. And just like Cadbury Eggs, they truly deserve to be enjoyed by everyone, regardless of religious affiliation.

To the outsider, these fried yeast treats could be misinterpreted as mini donuts or donut holes, depending on their shape. But their Greek kiss most often reveals itself when topped with honey and cinnamon to serve, and perhaps some sesame seeds for good measure. The winners of the very first Olympic Games (in Greece, of course) in the 8th century BCE did not receive gold medals, but gold tokens of honey-sweetened loukoumades since honey was treated as liquid gold . And that’s pretty much how Panagiotis “Pek” Peikidis treats them too.

Peikidis owns Café Boulis in the Astoria neighborhood of Queens, a pocket known as Greektown. If you relocated all Greek Americans from all of New York City to Greece, all assumed to be 180,000, they would be the third largest population in that country after Athens and Thessaloniki. Café Boulis, adjacent to a Greek church and a Greek school, is three blocks from a park called Athens Square where sculptures of iconic Greeks such as Socrates, Sophocles, Aristotle and Athena dwell.

The first great wave of Greek immigration in the early 20th century saw first-generation American Greeks disperse from New York to Florida or as far as Chicago; the second wave, from the 1960s to the 1980s, largely settled in the familiar neighborhood of Queens. This wave included Christos Peikidis and his wife, Lemona. While the couple had two sons in New York, Pek and Harris, the family eventually returned to Greece, where Pek fell in love with Greek coffee culture. It was not unusual, he said, for him to spend up to six hours a day at his mother’s cafe.

He is also responsible for the family’s eventual migration to New York along with his Greek-born sisters, Evantia and Eugenia. After earning a degree in computer science in Greece, Peikidis joined the fast-paced world of video game development. However, he bought Café Boulis from its founder ten years ago in order to get out of the more stressful video game field. These days you will also occasionally find Peikidou women working in Boulis. If you’re not too fond of sweets, try Mama Peikidou’s spanakopita (spinach pie).

The cafe is more than a place to find Greek coffee – which, by the way, is the same as what most Americans call Turkish coffee. Greece and Turkey share many culinary similarities, even though they don’t share the same name. For example, lokma or loukma are Turkish donuts, and as an interesting footnote to early Olympians earnings, lokma means “judge’s piece”.

But it is the loukoumades that are the obligatory accessory in Greek coffee culture from Athens to Astoria. Before the pandemic, there was even an independent walking tour operator that ran tours of Greektown. While other nearby taverns feature loukoumades on their dessert menus, the selfie-sticks were brought up in Boulis to show off to anyone who devours them here.

“In Greece, where we have big families, you want a cheap way to feed them,” says Peikidis. “The Loukoumades are pretty much just dough. You fry it, put some toppings on it, and that’s it. The manufacturing cost is super low and the taste is really good. So it’s an easy way for families to make treats.

In addition to the traditional loukouma with honey and cinnamon (it’s the singular), Boulis offers some drizzled with Nutella or Morello cherries. When summer returns, the café resumes its activities offering a trendy freshly fried plate.

The only traditional garnish you won’t find here is crushed walnuts. On the contrary, it is a fundamental distinction between Greek and Turkish desserts: the Greeks like to use nuts while the Turks traditionally use crushed pistachios.

But while Turkey is a huge honey producer and its citizens consume about 50% more bee juice than Americans, Greeks consume 50% more than Turks, per capita, as Europe’s top consumers. . So yeah, eating loukoumades with all that liquid gold really does make you feel like a champ.