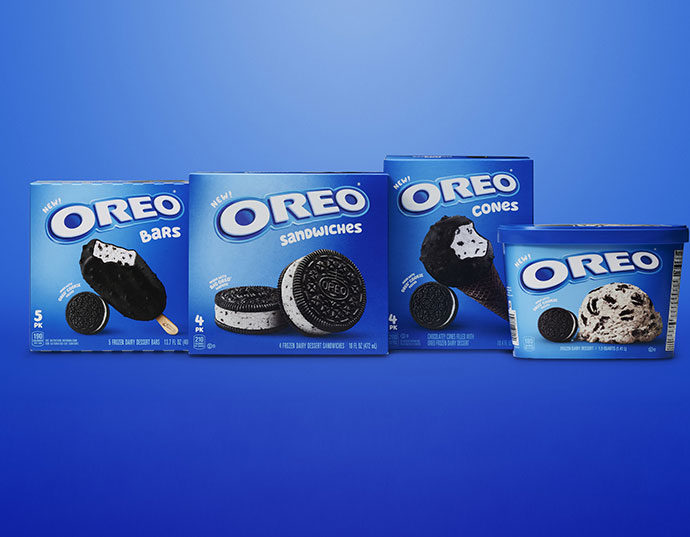 Sandwich cookie pieces are the key ingredient in one of the most popular flavors of ice cream. Now, Mondelez International, Inc., the maker of the world’s top-selling sandwich cookie, is looking to capitalize on that popularity with a line of frozen treats sold under the Oreo brand.

The new range will include bars, cones, sandwiches and Oreo trays. The bars and cones contain Oreo pieces and are dipped in a coating made from crushed Oreo wafer pieces. The sandwiches feature two large Oreo wafers. All products feature a cream flavored base with Oreo cookie pieces. Bins will also come in a 2-in-1 variety including both Oreo and Chips Ahoy! cookie pieces.

While the top 10 lists vary, cookies and cream are still among the top-selling ice cream flavors in the United States. The flavor ranks third in popularity on many lists, behind chocolate and vanilla, including a 2017 survey by the International Dairy Foods Association.

Mondelez says its new line shouldn’t be seen as a “me too” cookies and cream product.

“The Oreo brand extension is a playfully reimagined version of the classic chocolate sandwich that cookie fans know and love,” the company says. “Unlike the average cookie and cream with vanilla ice cream, the new Oreo frozen treat recipes have been perfected by Oreo to ensure that the familiar, authentic taste of real Oreo cookie flavor is infused into every delicious bite.”

Oreo ice cream and other frozen desserts have been offered for many years under co-branding agreements. Unilever previously sold Klondike Oreo bars, a product that has been replaced by Klondike cookies and creme bars without the Oreo branding. A competitor, Nestlé offers a frozen dessert sandwich with Toll House chocolate chip cookies. A myriad of ice cream brands — including Ben and Jerry’s, Breyers and Blue Bell — sell cookies and ice cream without the Oreo brand.

“We’re continually looking for ways to playfully reinvent our classic cookie and are excited to bring this new Oreo innovation to the freezer aisle,” said Justin Parnell, Vice President of Oreo US. “Created for our most loyal fans, we’ve perfected Oreo frozen treat recipes to deliver signature Oreo flavor in every bite. We hope this delicious new treat provides even more opportunities for fans to foster moments of playful connection. around a shared love for Oreo.

Mondelez will mark the line’s official freezer aisle debut with a digital campaign titled “The real thing is finally here.” The creative will appear on social and paid media this year.

The new Oreo frozen treats are available now at select retailers and will be available nationwide in March.