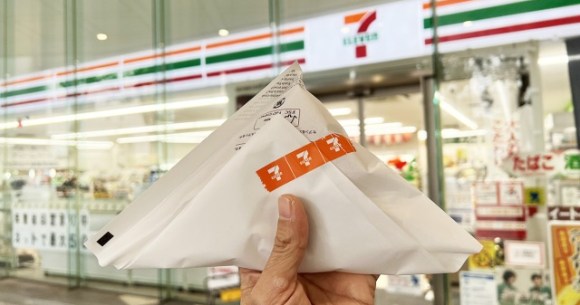 They’re marketed as donuts, but they actually taste like something else.

Our Japanese-speaking reporter Go Hatori walks in and out of convenience stores, picking up snacks and drinks before and after work and between visits to his beloved Daiso.

This means he’s always up to date with new releases, even ones that aren’t widely announced, and that’s why this week he’s been fortunate enough to stumble upon an elusive new product called Cream Donut in its local 7-Eleven.

Go had never seen anything like it offered at a convenience store chain, let alone his local 7-Eleven, and the fact that it was a limited-time product only available in his area made him even more curious to try it.

After a short walk home, Go peeled off the 7-Eleven duct tape and opened the wrapper to reveal the donut. Seeing him for the first time, his first reaction was …

Agepan, or fried bread, is a popular sweet snack in Japan, commonly served as part of school lunches, where they usually appear as long buns. While this agepan was round, the aroma of fried bread emanating from it brought Go back to the school lunches he ate as a child, which certainly wasn’t a bad thing, but it just wasn’t not what he expected when he ‘I ordered a’ Creamy Donut ‘.

▼ Cutting it in half confirmed to Go that it should be classified as a fried cream bread rather than a donut.

Still, Go didn’t particularly care how it was marketed, as all he cared about was how he tasted. So he brought half of the donut-bun hybrid to his mouth, and the moment he bit into it, he knew it was a dangerous flavor.

It was hot… crispy… creamy… chewy… sinful… sweet… and downright delicious. It tasted more like an agepan than a western donut, but that’s actually what made it so good.

It was incredibly good, and Go was so inspired by its sweet, heartwarming, nostalgic flavor that he wrote three lines as an ode to it:

Hot boiling cream which is a little sticky “

As well, staff told him it was only a test sale and there are no plans to expand nationwide. So keep an eye out for that during your 7-Eleven runs this week, and while you’re at it, you might stumble upon Go, as he plans to buy a bun a day in the hopes that they’ll reconsider the sale. test and deploy it permanently in stores across the country!