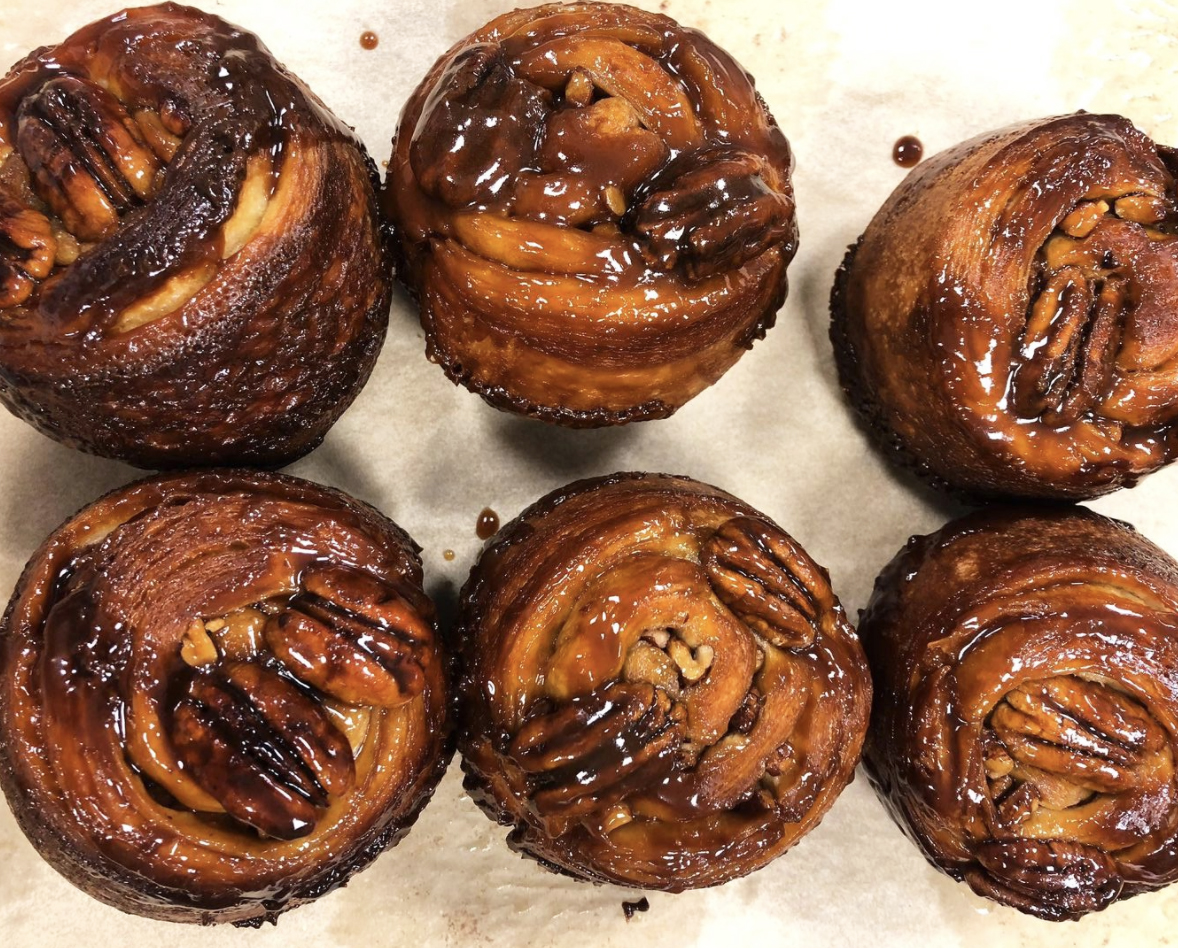 By Van E. RobinsonDecember 2, 2021No Comments

Two Crabs Bakery: Husband and wife culinary duo Theresa Louis and Christopher Audia, who have worked in local restaurants since 2018, launched this new bakery that started as a craft business in 2020. “We always wanted to have our own food business,” tells us Luis, pastry chef. “We both quit our jobs and were looking to start our own business. We knew we couldn’t afford to open a restaurant and I always dreamed of having a bakery. So it was the natural way.

Now, Two Crabs is taking online orders for pickup and delivery within the city limits on Saturdays. You can also find their baked goods at Pillion Tea in Midtown-Belvedere, Bird in Hand in Charles Village, and through local meal delivery service Scratch Made. Louis and Audia, who met in 2011 at culinary school, whip up delights such as cookies, cakes, danishes, croissants and fruit galettes in the summer. “We’re also trying to get into more breads,” Louis says. “We made bagels and Chris worked on more rustic whole-grain loaves to sell.”

For the upcoming holidays, expect cookie assortment boxes with classics like Italian butter cookies, Russian tea cakes and ginger molasses desserts. Is a brick and mortar a possibility for Two Crabs on the road? “Of course,” Louis said. “We would like to see where this takes us.”

Maillard Pastries: Speaking of baked goods, this B-More Kitchen-based bakery — which currently sells its weekly wares to Sophomore Coffee and Cafe Los Suenos, among others — has found a permanent home in the former Full Circle Donuts space on Chestnut Avenue in Hampden, which closed last month. Owner and Charleston alumna Caitlin Kiehl told the Baltimore Business Journal which it hopes to be operational in space by February. As soon as it opens, neighbors will be able to taste the signature brioches, cookies, pastries, cakes and pies of the pastry chef.

Copper shark: Locust Point will soon have a new neighborhood spot in the former home of the beloved Wine Market Bistro. SouthBmore.com reports that Copper Shark will open at the Foundry on Fort Avenue complex in January, bringing a new concept from Mid-Atlantic Eateries (MAE), the restaurant group behind the Eggspectation breakfast and lunch chain. The restaurant and bar will be chef-led, seasonal and offer an extensive list of bourbons, whiskeys and cocktails, according to SouthBmore.com. MAE is renovating the space to create a bar room, a large dining room and an outdoor patio.

Fodder: In October, we announced Chris Amendola’s project to take over the former Orto space at Station North. Now the chef and his team have moved from Hampden and they are officially opening the doors to the new Foraged location on Tuesday, December 7. In the new space, diners can expect a larger dining room, a full bar, and a few new additions to Amendola’s hyper-seasonal food roster. Reservations are available now.

Cuples tea house: After its official debut on November 27, Cuples Tea House in the downtown Bromo Arts District is open at 409 N. Howard St. Owned by Eric and Lynnette Dodson, the shop offers loose leaf teas from premium quality, take-out items, and tea tastings. “We wanted to bring [loose leaf-tea] to people as a substitute for sugary soft drinks,” Lynnette told WYPR in late September. The Dodsons launched Cuples Tea in 2015, popping up at farmers’ markets, offering home teas and running an online retail operation. (Actress Jada Pinkett Smith even included Cuples’ chai gift set in her 2019 holiday gift guide for People magazine.) The tea house storefront joins a number of new black-owned businesses, including Cajou Creamery and Vegan Juiceology, on Howard Row, which has been redeveloped by the Baltimore Development Corporation.

Sammy’s Trattoria II: This authentic Italian spot is back in two places. After closing its enoteca in Fells Point, Mt. Vernon Restaurant has completed construction of a new home in Hunt Valley, and it’s officially open. “We’re just getting started and trying to walk before we sprint,” Sammy’s team wrote in an Instagram post announcing the opening. “So please understand that we are not ready for full capacity.” The post recommends customers keep an eye out for an upcoming new website launch and follow its new Instagram page for information on Hunt Valley and downtown restaurants. “Grazie mille for all the friends and family we have built over the years, and we look forward to seeing you in both places.”

02/12-30/12: Guinness Open Gate Brewery Vacation Movies
Get into the Christmas spirit with a pint of Guinness in hand. The brewery, located about 10 minutes from Halethorpe town centre, will host a series of Thursday movie nights throughout December. First, of course, is Alone at home on December 2, followed by Jingle All the Way on December 9. (See the rest of the lineup here.) Movie nights are free and will take place in a heated tent. And while you’re there, be sure to try Guinness’ seasonal beers, including Spicy Gingerbread Stout. Guinness Open Gate Brewery. 5001 Washington Blvd.

12/6: Hanukkah BrewHaHa at Union Craft Brewing
Celebrate the last night of Hanukkah at Union Craft Brewing, where you can enjoy latkes from Well Crafted Pizza, sufganiyot-flavored ice cream from The Charmery and a Hanukkah sweater contest. Of course, Union beers will be on hand and can be enjoyed while listening to live music from 27th Street Kleztet. Tickets are $18 in advance and $21 at the door. Proof of vaccination or a negative COVID test within 24 hours prior to the event is required. Register here. Union Craft Brewery. 1700 W. 41st St. STE 420.

Mr Nice Guy Cocktails: Canton cocktail bar Mr. Nice Guy Cocktails, which quickly became a neighborhood favorite when it opened on the corner of Kenwood and Fait in 2020, has closed shop. The bar announced in a Facebook post on Nov. 22 that “we served our last drink at 800 S. Kenwood.” The message did not detail the cause of the shutdown, but thanked former customers for their support. “We really want to thank everyone who has helped make us who we are over the past 20 months. We haven’t fully addressed our next steps yet, but we’ll follow up with another post when that is. appropriate.

Mr. Nice Guy Cocktails gave Baltimoreans one last chance to enjoy a cocktail with them by offering a special Thanksgiving menu last week. “We thank everyone who makes a purchase from our farewell menu,” the post read. “Honestly, we wish we could have ended with a party, but that will have to do.