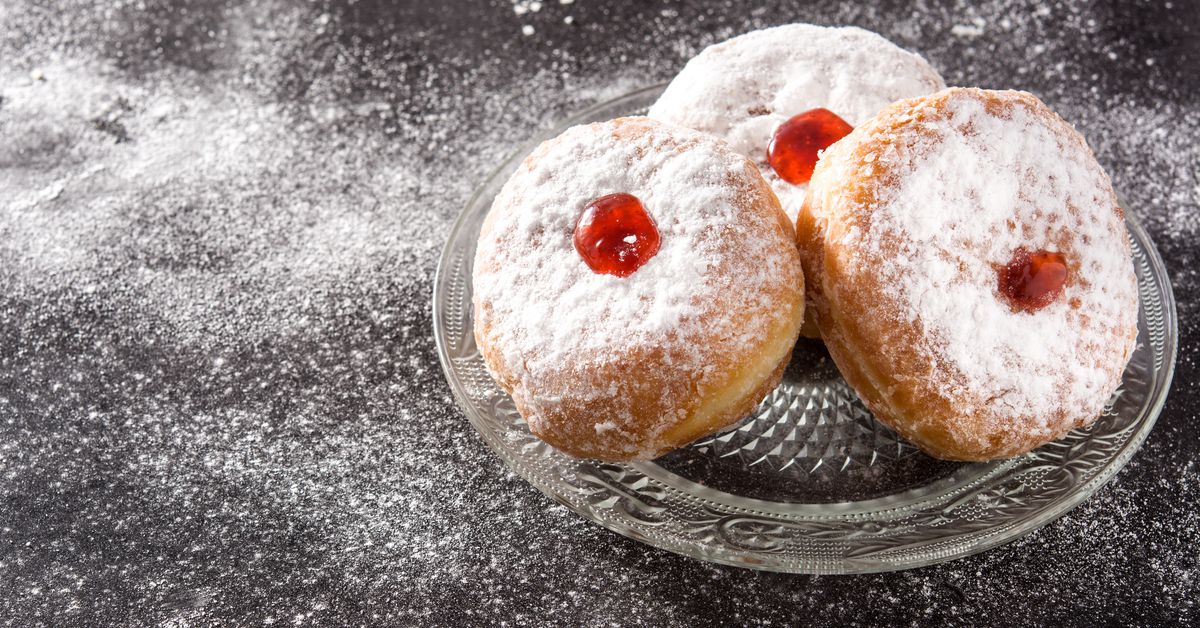 Where to find Hanukkah Sufganiyot or Jelly Donuts in Atlanta

Food and food traditions have always played an important role in many Jewish holidays and celebrations, and the eight days of Chanukah are no exception. This year Chanukah begins at sunset on Sunday November 28 and ends Monday December 6. Atlanta food and culture writer Robbie Medwed delves into the origins of the fried foods served during Chanukah, including where to find kosher versions of the delicious fried jelly donuts called sufganiyot in Atlanta.

The eight days of Chanukah commemorate the victory of the Maccabees, a small group of Jewish rebels who fought (and won) against the Greek rulers in 164 BCE after conquering the Land of Israel, banned all Jewish practices and desecrated the holy temple in Jerusalem.

â€œWhat Hanukkah celebrates, basically, is the victory of the few over the many,â€ says Rabbi Ari Kaiman of Congregation Shearith Israel of Atlanta in Morningside. â€œThe Jews defeated the Greeks and restored the Temple, and when they did, they found just enough oil to light the menorah for a day, but it lasted eight. ”

Jews light their own menorahs – known in Hebrew as Hanukkiyah or Hanukkah menorah – each night of the holiday in remembrance of the light that lasts eight days. “In honor of the miracle,” Kaiman adds, “we eat food cooked in oil.”

Most Americans are familiar with the latke (or potato pancake) that was brought here by Ashkenazi Jews from Eastern Europe. Made with grated potatoes, onions, and spices, then fried in oil, the latke has since entered mainstream food culture in the United States and can be found in kosher and non-kosher restaurants across the board. country. But there’s also another familiar fried treat on the table during Hanukkah: donuts.

In the early 1920s, as immigration to the Land of Israel reached its peak, immigrant Jews wanted to find new food to honor Chanukah. Enter the sufganiyah, the jelly-filled donut. Sufganiyah (sufganiyot; plural) is inspired by the Jews of North Africa who made sfinge – a fried dough dipped in orange honey syrup – and savory filled donuts made by Eastern European Jews. As a nod to their former oppressors, this new donut was named sufganiyah, which has its roots in the Greek word sufgan meaning “fried” or “spongy.”

During Hanukkah, as well as in the weeks leading up to the holidays, the sufganiyot can be found in cafes and bakeries across Israel. Each year finely decorated donuts and new toppings range from dulce de leche and Nutella to chocolate and tropical fruit.

Where to find sufganiyot in Atlanta

Over the past decade, sufganiyot have grown in popularity in the United States and can now be found regularly in bakeries and stores during Hanukkah. However, find Kosher certified sufganiyot in Atlanta can be tricky, as there are only a few kosher restaurants and bakeries around town. Contrary to popular belief, kosher food is not “blessed by a rabbi”. In order for a food to be certified kosher, it must be supervised by a qualified mashgiach or kashrut (kosher) supervisor at every stage of its preparation.

â€œWhat the certified kosher symbol basically means is that the food has been overseen in its preparation,â€ says Meredith Schwartz, a former personal kosher chef in Atlanta. â€œA trustworthy and knowledgeable person ensured that all the rules were followed during food preparation, whether in a restaurant or in a production facility. “

“This is the person who guarantees that there were no shortcuts along the way, that there was no mixture of meat and dairy products, and certainly no pork or shellfish. She adds. “It’s not about whether someone blessed it or whether it’s inherently healthier, it’s just supervised from start to finish.”

While the sufganiyot are found at many non kosher Metro Atlanta establishments including Alon’s Bakery, Goldberg’s Fine Foods, Aziza, Revolution Donuts, The General Muir, and Best Bread Baking Company (known as “Eli Pita”), try one of the seven stores in Donuts and markets following for some of Atlanta’s best Kosher certified sufganiyot during Hanukkah this year.

2211 Savoy Drive, Atlanta
Located in an indescribable mall off I-285 on the edge of Chamblee, Tip Top Kosher Market looks more like a convenience store than a grocery store and restaurant. The market offers a wide selection of Israeli products and fresh pastries. Tip Top’s traditional sufganiyot arrive direct from Israel and must be ordered a day or two in advance. While you pick up that sufganiyot order, grab a few other items, like Israeli beer and snacks, as well as salads and some of Tip Top’s amazing dairy products.

2566 Briarcliff Road NE, Atlanta
Sublime’s location in Toco Hills is Atlanta’s only kosher certified donut shop outpost. The offerings here are decidedly non-traditional, but that’s part of what makes these donuts so popular. Try the butterscotch and dulce de leche to spice up Hanukkah. Make sure to call at least 24 hours in advance and order enough alphabet shaped donuts to spell over ten different ways to translate the name of the party into English.

2153 Briarcliff Road NE, Atlanta
Kosher Gourmet is one of Atlanta’s oldest kosher butchers, known for making their certified kosher meats to order. Find fresh and frozen cuts of beef, lamb, chicken, and more here, in addition to kosher wine and basic kosher ingredients. The shop also has a deli counter with freshly made and stacked sandwiches and traditional sufganiyot during Chanukah. Kosher Gourmet offers individual lots and sufganiyot for sale in flavors such as classic jelly, cookies and cream, s’mores and rainbow berries. All donuts are also pareve (dairy free). Order ahead or drop by the store to see what donuts are available for Chanukah.

2887 North Druid Hills Road NE, Atlanta
When Atlanta’s kosher cooks need hard-to-find kosher ingredients, they often head to Spicy Peach in the Toco Hill Mall. This year, sufganiyot are available for pickup in packs of eight. However, supplies are limited. Spicy Peach also offers frozen potato latkes, pasta in fun Hanukkah shapes, lots of gelt (pieces of chocolate), and a chocolate-coated marshmallow treat called krembo, which is very popular in Israel. Don’t skip the gummies here and be sure to try the Israeli Sweet and Sour Doritos as well.

5200 Northland Drive, Sandy Springs
Once a simple kosher catering business, EB’s Ghost Kitchen expanded its offering in 2020 to include freshly prepared take-out. In addition to its weekly Shabbat meals with traditional and modern fare like Moroccan salmon or the sous vide London grill, EB also offers sandwiches on Tuesdays and â€œhealthyâ€ meals on Wednesdays. Order cookies and cream or pretzel caramel sufganiyot online to accompany pastrami egg rolls or a steak sandwich. Pick up location in Sandy Springs. Sufganiyot are only available on Chanukah week. Order online.

3025 North Druid Hills Road, Atlanta
Although Duck Donuts has been around for a while in Atlanta, the Toco Hills location of this national donut chain became certified kosher in 2021. Build a box of a dozen donuts from one of the most flavorful flavors. Shop favorites, including Blueberry Lemon, French Toast, or fan favorite Peanut Butter Paradise. Duck Donuts also invites customers to create their own flavor combinations by choosing a coating, topping and a filet. Order online.

Riverdale, Woodstock, Buford, Cobb Drive
While Atlanta’s popular Ponce location in Midtown (the alone in the city, Krispy Kreme Certified Kosher) is currently closed after two devastating fires this year, people can still get their sufganiyot filled with jelly in other places in the Krispy Kreme area. The Riverdale, Woodstock, Buford, and Cobb Parkway stores are also Kosher certified and regularly carry the traditional jelly-filled sufganiyot – called â€œfrozen raspberry filledâ€ on the menu – during Chanukah. For large orders, it is better to order in advance.

Robbie medwed is an Atlanta-based food and culture writer and a regular contributor to Eater. His culinary writings have appeared in the Atlanta Jewish Times, the Jewish Food Experience, Grok Nation, and Eater Atlanta.

Disclaimer: Restaurant meals are viewed by health experts as a high risk activity for the unvaccinated; the latest data on the delta variant indicate that it may pose a low to moderate risk for vaccinees, especially in high transmission areas. The latest directive from the CDC is here; find a COVID-19 vaccination site here. People are strongly advised to wear masks indoors or in crowded situations, regardless of their vaccination status, to help mitigate the spread of COVID-19.