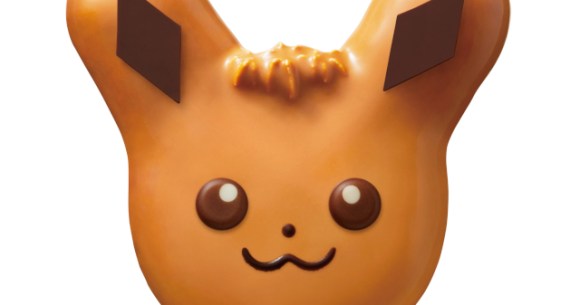 Pokémon donuts are making an appearance in Japan, with Eevee joining the new Mister Donut line!

As the year draws to a close and begins to draw to a close, Pokemon fans have been keeping an ear out for news of Mr Donut about their annual Christmas collection.

For the past few years, the Japanese donut chain has teamed up with Pokémon for exclusive candy and merchandise to mark the holiday season, and today they revealed the popular collaboration will continue this year too, with some shiny new additions to spark extra excitement.

While Pikachu has been the star of recent Mister Donut collabs – in versions that are both spooky and tasty – this year, the electric Pokemon will be joined by another beloved character from the franchise.

Although this is Eevee’s first appearance as a donut, crowd-favorite Pikachu will be returning for the third time, due to popular demand. Both donuts sell for 270 yen (US$3.17) for takeout and 275 yen for dine-in customers (tax differs for takeout and dine-in in Japan).

Fans will be delighted this year with a new range called “Furumuki Donuts” (“Looking back on donuts“), which are priced at 194 yen for takeout and 198 yen for dine-in customers. Although these are normal looking donuts that do not have the shape pokemon, each comes in special packaging with a pokemon butt square and center, showing the character looking at you over their shoulder.

the Donut Eevee Furumuki has whipped cream and chocolate cream sandwiched inside, and is finished with coconut and caramel chocolate.

the Donut Pikachu Furumuki has whipped cream and custard sandwiched inside, and is finished with manure flavored chocolate.

the Pokemon Furumuki Donut has whipped cream sandwiched inside and finishes with a cider flavored white chocolate and sugar (cider in Japan is alcohol-free and tastes like lemonade).

▼ This variety allows you to imagine biting into the butt of one or the other Piplup, Pachirisu or Glaceon.

As in previous years, the chain’s signature Pon de Ring donuts are being renamed”Crown Bridge” for the holidays, and this year they will be available in the following three flavors, priced at 162 yen each for takeout and 165 yen for eat-in.

Once you’ve stocked up on Pokémon donuts, you can keep the party going all winter long with a limited-edition blanket, plate, and mug.

The merchandise can only be obtained by purchasing one of the following sets:

the Donuts set (1,350 yen to take out or 1,365 yen to eat in) contains a pocket monster donut, a Furumuki donut and two of Wreaths’ Pon, as well as one of the merch items, packed in a bag or box of origin.

the Drink Together (1,450 yen for takeout or 1,465 yen to eat in) contains a pocket monster donut, plus a tapioca drink and one of the Pokemon merch items, packaged in an original bag or box.

All products and donuts from this year’s Christmas collection will be available at Mister Donut stores in Japan from November 12 to the end of December. After that, it’ll be time to grab all their fukubukuro lucky bags which, judging by last year’s release, will also contain some cute Pokemon goodies!

Source, images: PR Times
● Want to be up to date with the latest articles from SoraNews24 as soon as they are published? Follow us on Facebook and Twitter!