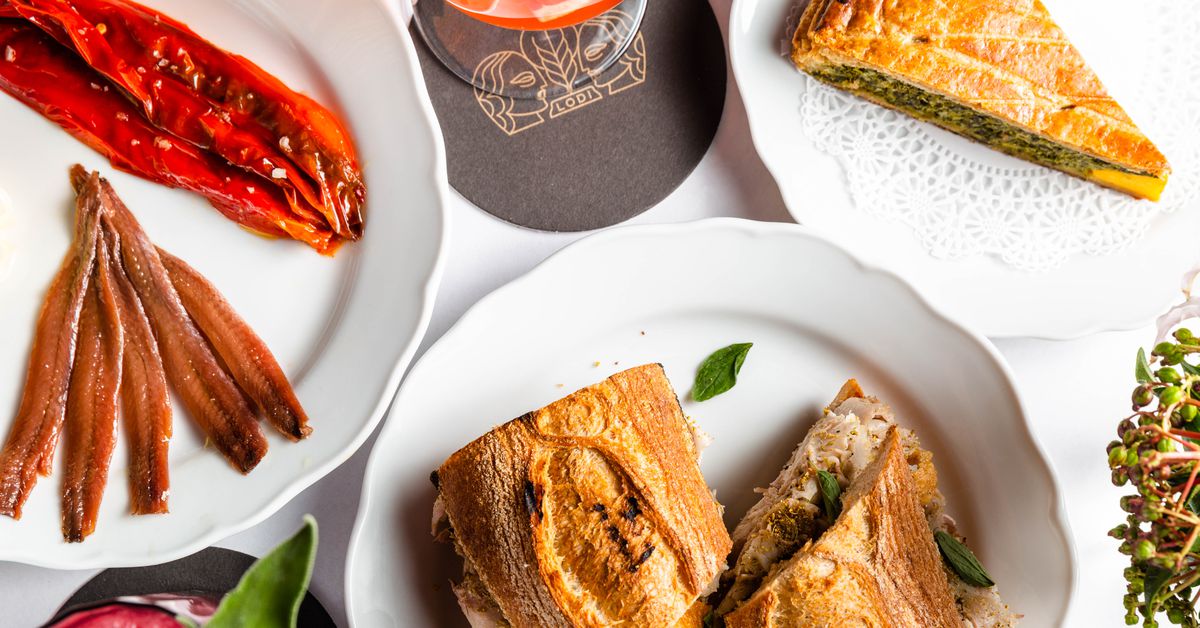 By Van E. RobinsonNovember 3, 2021No Comments

Whether you classify Lodi – from the team behind Estela and Altro Paradiso – as an accessible coffee shop in Rockefeller Center or an exorbitant canteen for TV executives will depend on whether you pass for a quick pastry or have booked a table to pay. country club price for a very average salad.

Those who sit down for a full-service breakfast or lunch will find a bowl of oatmeal that costs more than a six-pack IPA ($ 16); a plate of fennel and bottarga that commands higher prices than most restaurant burgers ($ 24); and a single ice cream offering that just happens to be large format ice cream. This frozen treat costs $ 25. It feeds up to four people, per menu, which would be ideal for an after dinner party with a group of friends. The problem is, Lodi closes at 4 p.m. And in case you’re considering attacking the ice cream solo for a morning lunch, one waiter tells me he doesn’t provide empty pint containers for leftovers.

On the other hand, those who pass by for a quick snack or coffee will encounter a more affordable hangout, a haven for independent culinary bliss amid the entire commercial frontage of Midtown Manhattan. This is not an easy task ; tens of thousands of office workers and tourists surely pass through Rockefeller Center every day for work, shopping, and admiring a very large Christmas tree. Despite the harsh realities of commercial real estate, it’s hard not to wish that homeowners here could replace a few cupcake shops and designer jewelry stores with local delis and taquerias – to remind us all that accessible gastronomy belongs to even the brightest sections of the city. And while I hear there is some positive change on the horizon in this regard, Lodi has a few solid lunch offerings so far, including a porchetta sandwich made with the potent flavors and generous portions one might expect from a street vendor.

The kitchen also offers what could be the Millennial Chocolate Croissant, a cylinder-shaped pastry that offsets a subtle moistness with a crunch so firm it’s reminiscent of a fresh Dominican chicharron. It costs $ 7, which still makes it one of the most expensive pain au chocolat in town, but hey, at least it’s cheaper than ice cream.

New York City has undergone – and is still suffering – a pandemic baking boom, which isn’t a surprising reality since these establishments cater to people looking for daytime delicacies rather than full-blown sit-down meals. Over the past year or so, Frenchette Bakery has sprouted up in the old downtown Arcade space; Dominique Ansel has found a home for giant brioche bressanes in Flatiron; The Sofreh Cafe brought Persian breads to Bushwick; and the crew of the Salento gave Washington Heights a solid Colombian panaderia. The local formwork of the Maison Kayser and Bouchon chains also left a sort of pastry power vacuum across Manhattan.

It is in this context that chef Ignacio Mattos, who runs the growing Empire Matter House, walks through the heart of the city with Lodi, occupying a former outpost of Bouchon and offering croissants, girellas, bombolone and lush anchovy platters with golden slabs. of fougasse.

Mattos has traditionally drawn crowds with subtle chunks of modern whimsy: hiding heaps of luscious blue cheese under lean rounds of endive and secretly hiding potato chips under crimson sheaths of beef carpaccio. Lodi, however, is a simpler affair. And although it is painful to discover a Mattos restaurant without the excellent pastries and the warm presence of Natasha Pickowicz, who ran the dessert program at Altro and the now-closed Flora Bar, Lodi has a full-fledged baker: Louis Volle, a Blue Hill at Stone Barns and Tartine alum who grinds his own flour and oversees the daily production of breads and pastries.

What also helps set Lodi apart is that it is the most luxurious of the new bakeries in town, a grand Italian cafe decked out in marble and gold trim. Come and enjoy a stellar pastry and suddenly you’re overlooking one of the city’s great Art Deco squares. One recent morning I passed after a bike race to admire the divine character of Lee Lawrie Wisdom sculpture and stock up on a pastry that is not entirely uncommon in Manhattan but not as ubiquitous as it should be: the grand maritozzo con la panna.

Volle slices brioches – imagine a three-dimensional Pac-Man – and stuffs them with vanilla pastry cream and whipped cream infused with fig leaves. The end product seems light, but Volle bakes her buns with freshly ground Edison wheat flour, giving them the proper weight and consistency. The result is a wonderful contrast: a salty bread with a bit of lamb’s lettuce, and a mess of aromatic cream that disappears with the weight of a cloud.

This is the Lodi I like to meditate on, the one filled with stellar baked goods, rather than the one that peddles $ 32 vitello tonnato appetizers and truffled bottarga salads with little taste of truffle or bottarga – dishes that seem aimed at well-heeled tourists and nearby TV types who are back in their offices. A client in a brown suit next to me spoke for 30 minutes about the “audience engagement strategy” for a series of top reality shows while munching on a pistachio girella – a crunchy reel of puff pastry. filled with a hazelnut cream as powerful as marzipan.

Clockwise from top left: Lodi’s golden interior, a kale and egg pie, and a platter of anchovies with butter and Jimmy Nardello peppers.

Those of us who don’t have time to get to Midtown for a business class lunch might have dinner service to look forward to later this fall. For now, I’ll be coming for the take-out prosciutto sandwich ($ 9), a bunch of minced meat on a soft buttery brioche. There is nothing particularly grandiose about it; it’s just good bread that does its best to showcase some Italian hazelnut ham.

Better yet, the porchetta on a crispy baguette – thinly sliced ​​fatty pork stacked high and paired with dense slices of cracklin for a crunchy umami. What sets this sandwich apart is the cooking’s generous use of fennel pollen, which is admittedly not an uncommon addition in classic Tuscan versions of the dish. But here, chef Maxime Pradié (fire of Flora) sprinkles it with such a quantity of ingredients that the top half of the sandwich becomes practically orange, leaving the meat to display a thermonuclear level of anise and aniseed heat. These are the adjustments one would expect from Mattos and his team, who have long shown a knack for transforming a dish with deceptively simple ingredients; try Estela’s beef tartare with fish sauce and Jerusalem artichokes and you’ll see what I mean.

The Classic Bread and Butter Course also gets the Matter House upgrade. Pradié places five anchovies on a white plate next to a pyramid of whipped butter and a few slices of charred Jimmy Nardelo peppers. At first glance, the dish appears as an absurd expression in the austerity and the primary colors: brown, red and yellow. Then you start to eat. You stack the ingredients on a dense, oily focaccia for a try of creamy dairy fat, rich sea salts, and capsicum-based sugar. In less hands, this trio would appear like an average wedding couch. In Lodi, it is elementary, like the discovery of earth, wind and fire.

In an ideal world, this would be the time for an ice cream treat, but Lodi insists on that big serving of expensive, made-to-order fior di latte ice cream. For something more reasonable, consider the budino di riso ($ 12), which doesn’t taste so much like rice pudding as it does a firm, sweet risotto bathed in crème fraîche. Mattos and Pradié hide at the bottom of the ramekin a bunch of grapes poached in red wine, leaving the musk fruit to act in acid relief on the heady milk.

The chocolate croissant, or flauto al cioccolato, is also a nice way to end things. Dominique Ansel recently created a little novelty by stuffing not two but three chocolate bars in his pain au chocolat. Mattos and his team are also following this bet with three bars, except that they are so close together that they appear as one, like a big little chocolate bar hidden in a pastry shop.

Because the crescent is long and shaped like a ribbed stem – reminiscent of a miniaturized Shai-Hulud by Denis Villeneuve Dune – it contains a higher chocolate / pastry ratio than the softer and softer Gallic staple food. Each bite is a precisely calibrated combination of sugar, French dark chocolate and extraordinarily crispy puff pastry. The idea behind the flauta, as the Lodi team tells me, was to “present the lamination by turning it over or exposing it, thus changing the aesthetics and the way it feeds”. Yes, it’s more expensive than most bacon, egg, and cheese sandwiches, and about half the filling, but it’s definitely one hell of a pastry – a bit of affordable luxury to pair with one of the big ones. public spaces in the city.