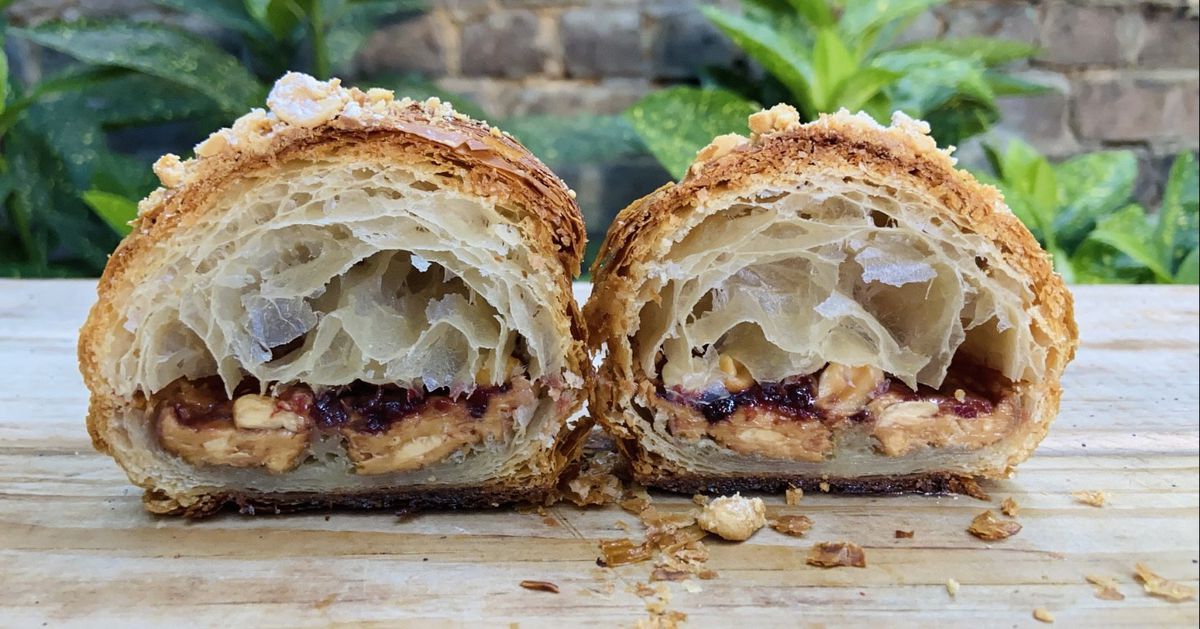 By Van E. RobinsonOctober 8, 2021No Comments

Over the past year, a Japanese-American bakery run by an Italian restaurant in Cleveland Park has wowed customers with exceptionally crispy, flaky pastries stuffed with unorthodox fillings. From yuzu flower croissant to cardamom bun and lemon meringue “cruffin” pie, each of baker Yuri Oberbillig’s creations at SakuSaku Flakerie are bursting with delicate seasonal flavors.

Despite difficult opening conditions in the midst of a pandemic, the small pastry shop at Trattoria Al Volo has built up a loyal fan base of croissant lovers. The regular menu includes a Gruyere za’atar croissant ($5.50) in which the rich hazelnut cheese complements the herbal and sumac flavor of the Middle Eastern spice blend. Another croissant combines a pistachio spread with two bars of dark chocolate. The bakery recently partnered with Lost Sock Roasters for coffee. He takes orders for custom pies and cakes for special occasions.

The idea for a twice-baked peanut butter and jelly croissant – filled with a layer of chunky peanut butter, roasted peanuts and a spread of raspberry jelly – came from Oberbillig observing her stepfather’s lunch routine. “I thought I could make a croissant out of it!” she laughs.

SakuSaku Flakerie (3417 Connecticut Ave NW) also offers traditional shokupan, a milk bread typically found in any good konbini. (Japanese convenience stores). Oberbillig comes from Kobe, Japan. She started working in the restaurant industry 10 years ago, learning to cook from videos of chefs whose techniques she admired. While his Japanese hometown is world famous for its beef, baked goods are a lesser-known specialty.

“Kobe has the most bakeries in all of Japan,” says Oberbillig. “Because of its very old history and huge port, it has attracted different cultures. That’s why we have a lot of European-style bakeries and patisseries there. »

The 32-year-old pastry chef has cultivated her talent internationally, first settling in Vancouver, Canada. She arrived in the United States at the end of 2017 after a few years working in bakeries in Japan. Her attention to detail and precision stems from an early desire to become a fashion designer. “As in fashion, shapes and designs are very important to me when I cook,” she says.

Oberbillig’s husband, Jason, helps her at the store and says she’s “obsessed” with practicing the techniques. After a long day at the store, she often brings her work home, trying new recipes until she is satisfied with the results. Every morning, she monitors the weather, the air humidity level and the temperature of the kitchen in order to adapt the settings of her oven for maximum flaking.

This fall, the chef went apple picking at Homestead Farm in Maryland. Salted Caramel Apple Turnovers and Classic Apple Pies will be appearing as limited specials at SakuSaku throughout the season.

Oberbillig previously worked at several DC bakeries, including A Baked Joint and French chain Maison Kayser. When Firehook Bakery closed next to Trattoria Al Volo in the summer of 2020, the owners of the pasta place seized the opportunity to expand. His partner Rolando Frias approached Oberbillig, giving him carte blanche to choose a name and develop a menu. “When I tasted his croissants, I was amazed,” says Frias.

Like pastries, the name of the bakery borrows from different cultures. “SakuSaku” is a Japanese word that describes the typical crackling sound when eating freshly made puff pastry. Jason Oberbillig proposed the “Flakerie” label as a portmanteau of puff pastry, bakery and pastry.