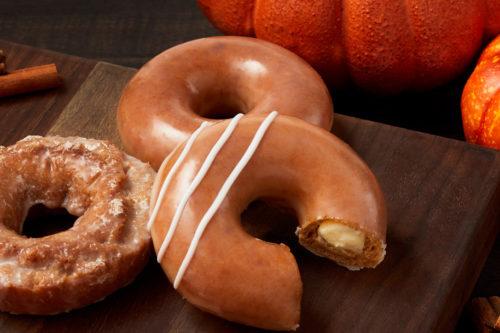 September is finally here and for Krispy Kreme fans that means a new set of donuts full of fall flavor.

Krispy Kreme’s new Fall-Inspired Frozen Donut Collection features nine fall-flavored donuts that will be rolling out throughout September. Each flavor set will only be available for a week, so you’ll need to stop by your local Krispy Kreme at least three times in September to try them all.

All three donuts are covered in the new Maple Frosting, but the Original Maple Glazed Filled Maple Kreme Donut is also filled with Maple Kreme, while the Maple Glazed Donut is made from yellow butter cake.

You’ll also want to keep an eye out for donut chain Halloween donuts in October. While we don’t yet know what they will be, last year we were treated to some monster donuts, four donuts decorated like Frankenstein’s monster, Dracula, and a werewolf.

You’ll also find fall-inspired goodies at Starbucks and Dunkin ‘, including a crisp apple macchiato at Starbucks and an apple cider donut at Dunkin’, as well as the return of their pumpkin donuts, donut holes. and muffins.

Which fall-inspired treats are you most eager to try?