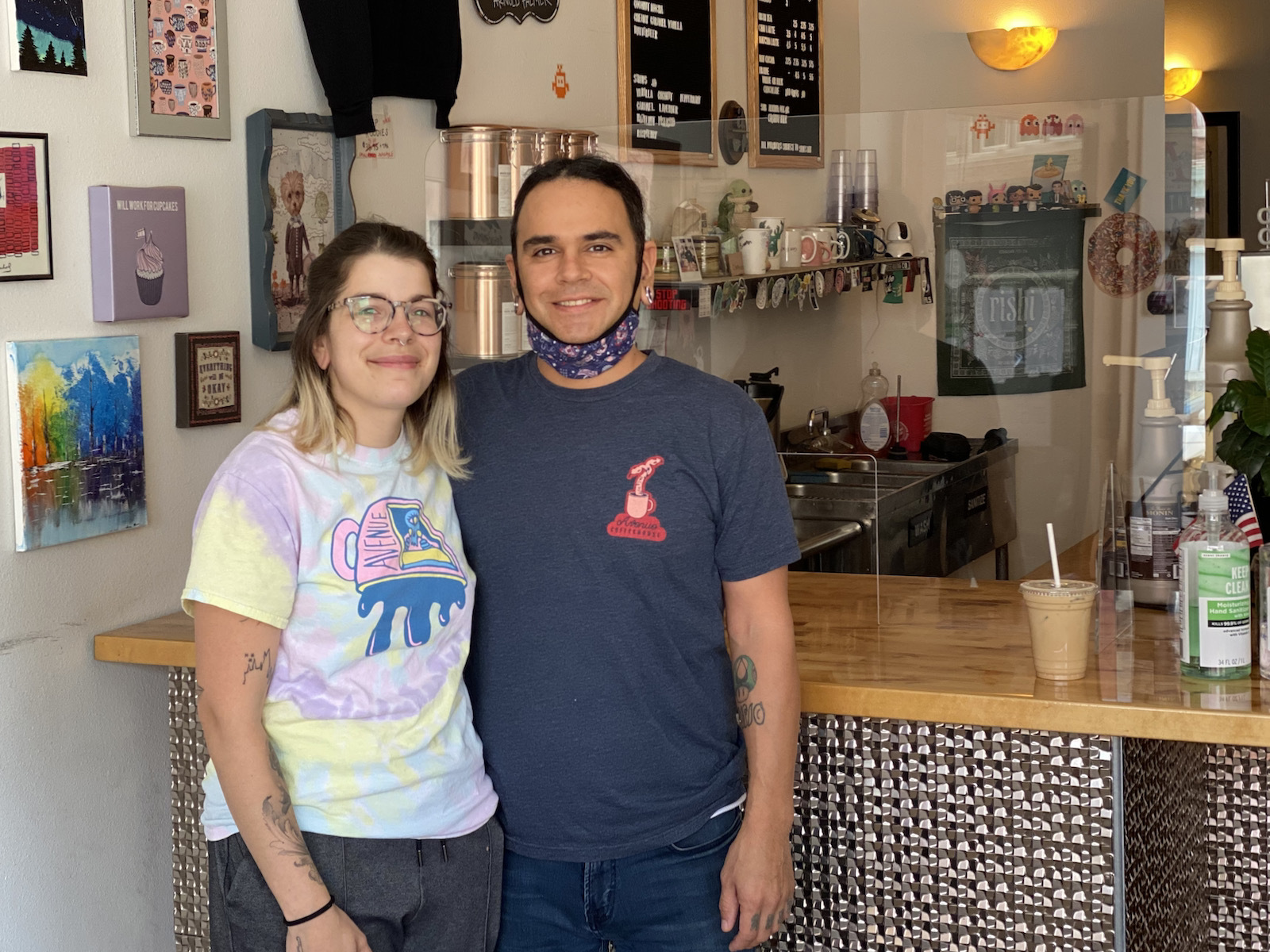 It will be five years in September since Sara Lewkowski and Aaron Ruiz opened their first business, Coffeehouse Avenue, at 911 Milwaukee Ave. in South Milwaukee. And, if all goes well, they may be able to celebrate this anniversary with a second location.

That’s because the two cafe owners have signed up to be tenants of the upcoming 3rd Street Market Hall, a food hall that will open with a tenant list that includes main tenant Dairyland Old Fashioned Hamburgers & Frozen Custard, Mid- Way Bakery, at least two herbal vendors, four hawker stand tenants, and a few more vendors to be announced very soon.

The new cafÃ©, to be called Supernova Coffee & Donuts, will occupy a prime location at the front of the dining room (and the only one to include a window without an elevator), offering a menu of coffee, espresso drinks andâ€¦ donuts. House. In fact, Supernova will be doing its part to reintroduce a unique style of donut to the Milwaukee market that has been practically lost in history.

Lewkowski says she has always loved coffee shops. In high school, one of her favorite hobbies was hanging out to local cafes with friends. And she says she often thought about how much fun it would be to own her own store.

â€œI wasn’t sure if that would ever happen,â€ she said. But, thanks to a series of fortuitous events, his coffee dreams came true, albeit nearly a decade later. And it started with a trip to the west coast.

In 2014, Lewkowski and Ruiz moved to California, where they lived and worked for about a year.

While there, Lewkowski took a job as a barista and worked in the operations of a small vegan raw snack business. Ruiz worked as a temp and played music for advice on the Santa Monica Pier.

Upon their return to Milwaukee, Lewkowski branched out, working for Classy Girl Cupcakes and East Side Ovens before working at the MKE City Sippers cafe in South Milwaukee. She also decided to enroll in the baking and pastry making program at MATC where she first met chef and instructor Kurt Fogle.

When the owner of the cafe decided to sell the business in 2016, Lewkowski and Ruiz expressed interest. In September 2016, they bought the store, renaming it Avenue Coffeehouse.

â€œWe changed the decor,â€ Lewkowski says, â€œadding eclectic art that we’ve collected over the years. Over time, we replaced the furniture and modernized the space. We also started selling wares, local pottery and art reproductions.

Lewkowski says they got lucky. The previous owner had established a strong customer base, so they had a head start in successfully growing the business, which offers a full line of coffees and espresso drinks made from locally roasted Anodyne coffee, smoothies and of Troubadour Bakery.

â€œWe actually outgrown the store in the first couple of years,â€ she says, â€œBut the idea of â€‹â€‹investing in leased space wasn’t appealing. So we started looking for ways to grow our business, including starting the search for a bigger location.

Then the pandemic struck. Lewkowski says they’ve adapted their operating model, removing the seats inside the cafe and converting the business to take-out only. Yet even with the change in operations, she says the business has continued to grow.

â€œWe’ve improved our website and added online ordering and curbside pickup,â€ she says. â€œAnd business has really increased. I think a lot of our business came from people who just wanted to support local small businesses in the area. We were really lucky. We had enough business to be able to keep our two employees as well.

Fast forward to 2020 and Kurt Fogle mentioned that they were looking for vendors in 3rd Street Market Hall.

â€œAt first it was not clear that this would be a good solution for us,â€ explains Lewkowski. â€œBut we went around the space and continued to discuss it. In the end, we saw it as a great opportunity for us to growâ€¦ but also to do something new.

â€œOne of the things I’ve always wanted to do is use the skills of the pastry school, but we never had the capacity in the cafe for that. It gives us the chance to do things that I have dreamed of for years.

From there, Supernova Coffee & Donuts was born.

The new business will occupy 177 square feet of space just inside the main doors of the upcoming dining room and will offer both counter service inside the dining room as well as a convenient pickup window. where people can pick up Supernova deals on the go.

On the menu, Lewkowski says they’ll have a range of coffees and espresso drinks, as well as an old-fashioned donut menu, vegan donutsâ€¦. and a very special style of raised donuts that are made with a combination of flour and potatoes to create a tender, air-filled donut that has less tendency to absorb fat from the fryer.

Unique donuts are actually far from a new invention. In fact, the potato fritter made popular in the 1950s by two brothers from Salt Lake City who adapted a German recipe for potato pastries and nicknamed them “Spudnuts”, creating an empire of apple fritters. of land that has spread across 38 states and beyond. But the popularity of the Spudnuts did not persist. According to a 2015 article in the Salt Lake City Tribune, the Spudnuts phenomenon was relatively short-lived, practically fading away in the late 1980s. Unfortunately, the name is still covered by federal copyright.

Nonetheless, Lewkowski says she’s excited to bring the concept to Milwaukee. In fact, she is currently working hard to perfect her donut recipe with the help of Fogle and his wife Katie, who will run the Mid-Way Bakery brand at 3rd Street Market Hall.

She says the store will also make its own frostings and frostings in popular flavors, including vanilla bean and chocolate. They’re also working on a flavor that incorporates coffee, she says.

â€œOverall, we try to keep it simple,â€ she says. “Our goal is to create very high quality donuts that we can sell at an affordable price.”

Of course, Supernova sounds great. But why the name on the theme of space?

Lewkowski says he was inspired by a bit of â€œaccidentalâ€ branding for Coffeehouse Avenue.

â€œWhen we opened we met a local artist, Lauren Marvell, who started drawing designs for our business,â€ she says. â€œWe gave her carte blanche, and the first design she came up with was an astronaut. We loved it, so we made sweatshirts out of it. From there she kept coming up with designs, most recently an alienâ€¦ and people love them. ”

â€œWhen we signed the contract for the food hall [which is located inside The Avenue], we decided that we had to change the name of the cafe, â€explains Lewkowski,â€œ So we thought about all kinds of ideas related to the space theme, and the name Supernova was the winner. ”

Ultimately, Lewkowski says she and Ruiz are grateful for the opportunity to not only run a business they love, but to have so much support as they move forward by establishing a second location.

â€œI own a cafe and have worked in bakeries.â€ Lewkowski said. â€œBut donuts and this whole concept are new to us, so it’s both exciting and a little scary to think about all of this. Fortunately, we are surrounded by great mentors and people who support us. So we’re really excited to show people what we’re capable of. ”

But that’s not all. The location of 3rd Street Market Hall may not be the end of the big news for South Milwaukee coffee. Lewkowski says they have continued to seek a larger location for their original location, and there may be some news to share in the coming months. If they can move, she says, she plans to expand the cafe’s offering to include a number of new things, including vegan breakfast and brunch.