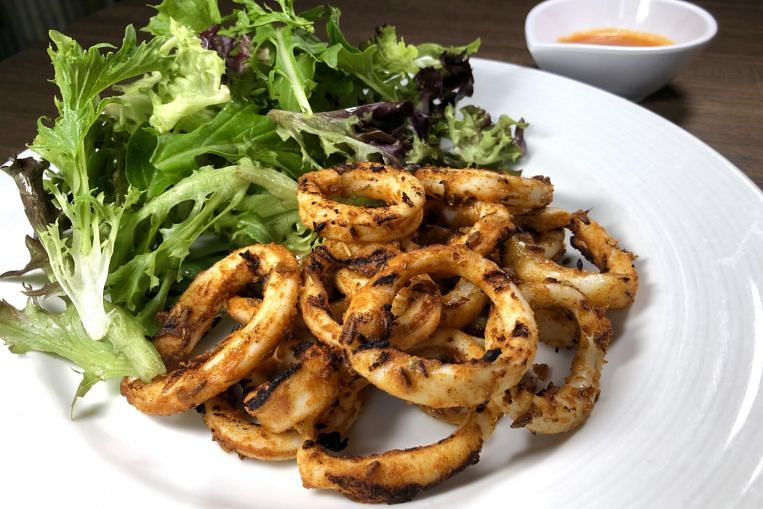 By Van E. RobinsonJanuary 7, 2021No Comments

Those who miss the wood-fired pizzas at Modesto’s, now closed, can savor those Italian flavors again at Eric’s Bistro in Hoe Chiang Road.

After Modesto’s closed in July, his group leader, Mr. Eric Cheah, 48, joined with other former colleagues to launch a new business, Eric’s Bistro which opened in September 2020.

Most of the items on its menu would be familiar to regulars at Modesto. The main difference is that Eric’s Bistro’s pizzas are cooked on electricity – not over a wood fire.

I find the Misto Carne pizza ($ 23.50 +) satisfactory. The thin crust is crisp and the filling of pork salami, cooked pork ham, chicken sausage and homemade marinated chicken thigh slices is tender and flavorful.

A remarkable hit is the off-menu grilled squid ($ 17.50 +). Forget the fried calamari, listed on the menu under appetizers. Insist on the grilled version.

The bistro uses fresh squid seasoned with spices inspired by the grilled skewers of Dongbei cuisine. Cumin and chili powder give the squid aroma, flavor and just enough heat. It doesn’t need any condiments, but the dish comes with the house garlic and chili dip that has been all the rage at Modesto’s.

The recipe came from Chef Cheah who was inspired by his maternal grandmother’s hate recipe for rice chili with chicken.

Another new dish at the bistro is Spring Chicken ($ 24 and up). Instead of the pan-seared version at Modesto, the spring chicken is marinated overnight in spices such as fresh ginger, garlic, onion, and curry powder. The curry powder is dusted before frying, which prevents the skin of the bird from burning. The spices permeate the meat well, which is juicy.

The portions here are good to share and offer good value for money.

Other dishes to try are Zuppetta Pesce ($ 16.50 +), a tomato-based soup with seafood. The come clams are fresh and not frozen and the bistro makes their own clam broth.

A good dessert offering is the homemade Panna Cotta ($ 10 +), made with vanilla seeds hand scraped from the bean.

With Tai Cheong Bakery and Joy Luck Teahouse Egg Pies, do we need another competitor in the egg pie market?

Yes, if they are from Wan Hao Pop-Up, which sells artisan Cantonese pastries made by the culinary team at Chinese restaurant Wan Hao.

The yam egg tart has a layer of filling similar to orh nee – Thai yam baked with corn oil and sugar – under the egg cream.

Japanese kidney beans – cooked for over an hour until tender – are used in the kidney bean version.

The Coconut Egg Tart ($ 3.50) isn’t bad either, with grated coconut giving a crunchy texture that complements the creamy egg creme.

Unfortunately, Gula Melaka’s Egg Tart ($ 3.50) didn’t really cut her off as the aroma and taste of gula melaka was weak. The filling tasted slightly more of caramel than rich gula melaka.

The cookie crust of the egg tarts is thin but holds remarkably well. You can use a knife to slice each egg tart without it collapsing.

Other items worth trying are Baked Char Siew Bun ($ 3 a piece) and Wife Cake (Lao Po Bing, $ 3 a piece). Both come with generous toppings. The char filling for the bread and the winter melon filling or the bride cake are prepared on site.

Best of all, the pastries aren’t too sweet.

The pop-up started on January 2 and ends on February 20.

OPEN: From January 2 to February 20, 11 a.m. to 5 p.m. Available for walk-in purchases for take-out only. No pre-order available