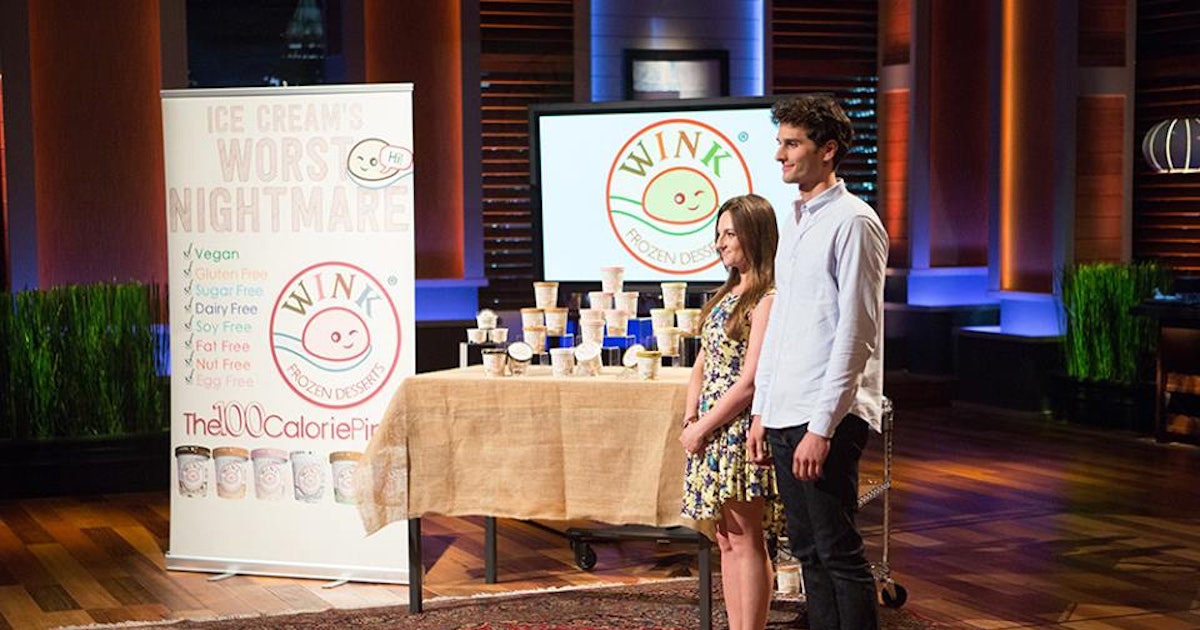 By Van E. RobinsonNovember 6, 2015No Comments

I think we can all agree on one thing: ice cream is the best, even if it’s not necessarily the healthiest, most satisfying treat. But as viewers will see on Friday night’s episode of shark tank, Wink Frozen Desserts hopes to change that with their tasty alternative to ice cream. So what makes this ice cream scream?

According to the product’s website, Wink frozen desserts are vegan, plant-based, sugar-free, diary-free, gluten-free, soy-free, fat-free, egg-free, and nut-free. To top it off, a pint contains around 100 calories. To compare, the average amount of calories in a pint of vanilla ice cream is 546, according to Calorie King. So if you’re watching your calorie intake or avoiding certain ingredients due to food allergies or diabetes, it seems this ice cream is for you. The good news is that you can buy Wink Frozen Desserts in some supermarkets and health food stores across the country – including Whole Foods – but it doesn’t look like they’ve ventured out to the West Coast yet, which leaves me winkless. Not for long, though, as you’ll also be able to order a minimum of four pints through their website, and orders will ship from November 16.

Will all this satisfy the taste buds of the Sharks? We’ll have to see if they open their wallets for this one. Make your own investment decision based on the Wink Frozen Desserts information below.

Wink CEO and Founder Gabe Wolff was diagnosed with celiac disease and a diary allergy at 17 – this meant he could no longer have conventional ice cream. “I struggled to find a satisfying dairy-free ice cream that didn’t harm my diet, so I started experimenting in my dorm kitchen,” he told Next Accelerator. “For years I kept tweaking the recipe until it satisfied my sweet tooth and my checklist.”

According to his AMA Reddit, Wolff was experimenting with recipes in his dorm at McGill University in Canada. “Wink is not only safe for me, but also for people with diabetes and other common food allergies,” he wrote. He started with Splenda and Cool Whip using a Cuisinart ice cream maker, but quickly moved on to other ingredients that would become Wink.

OK, so here’s what you go find in Wink Frozen Desserts, according to their website: pea protein, vegetable glycerin, organic agave inulin, organic tapioca flour, xanthan gum, monk fruit extract, guar gum, organic stevia extract, baking soda, organic cocoa powder and organic cinnamon. “I finally landed on pea protein isolate as a base because it doesn’t have an overwhelming coarse taste like soy and rice protein,” Wolff explained on Reddit. “We use organic stevia and monk fruit extracts to sweeten the ice cream, so there’s no chemical sweetener ‘no sugar but will make you grow a third eye’.”

So without sugar or a diary, you might be wondering how Wink’s ice cream tastes. Wolff explained on Reddit, “Wink is definitely not as creamy as an ice cream, but creamier than a sorbet. It’s closer to a heavy sorbet or a light ice cream. The main hurdle I “I had to overcome was the fact that sugar acts as an anti-freeze in fat-free ice cream. Fat-free, sugar keeps water molecules apart, to prevent ice formation. That’s why most alternatives Fat-free ice cream contains more sugar, and why sugar-free ice cream contains fat. Interesting!

There are six currently available flavors on the website: cake batter, cocoa-mint, cinnamon roll, cocoa batter, iced latte and vanilla bean. “If certain flavors work very well in the conventional ice cream areabut hasn’t been made (or barely made) in the ‘better for you’ ice cream market, so we’ll go for it,” Wolff told Total Food. “We like to deliver those fun flavors that people want to eat, but not because of all the drawbacks of traditional ice cream.”

Each pint costs around $5 in-store and $8 online. You can order a minimum of four pints from the Wink website or opt for one of the many flavor packs They offer. Six pints ship free, but West Coast gets an extra $3.

According to the product’s website, Wink Pints ​​can be used in a number of cool recipes, including one for everyone’s favorite fall drink: Pumpkin Spice Latte. Other recipes that use the snap include shakes, protein waffles, and pumpkin pie.

Just like regular ice cream, the possibilities are endless.