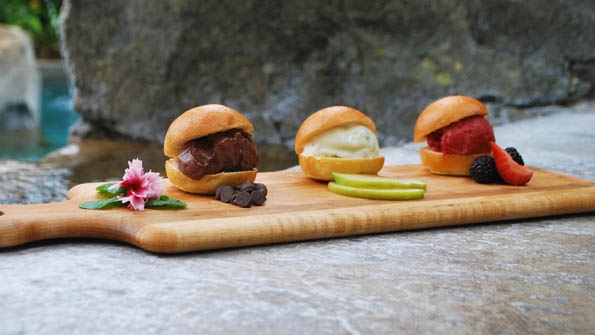 Restaurants are adapting to consumers’ active lifestyles by putting their own twist on portable summer frozen treats.

Friendly launched a new line of to-go ice cream bars, cones and sandwiches available at its restaurants in the Northeast, Southeast and parts of Mid-Atlantic, as well as in supermarkets across the Northeast is.

The 350-plus-unit family restaurant chain also introduced a 100-calorie Fudgealicious bar, which is premium fudge on a stick.

Jami Curl, owner of holy cupcake, an independent restaurant in Portland, Oregon, is launching a line of ice cream sandwiches and bars for the summer. They include a Peanut Butter Cakewich – peanut butter ice cream sandwiched between slices of the restaurant’s popular chocolate cake and rolled in a savory peanut praline – and a HoneyBerry Vanilla Bean Cookiewich, for which local strawberries and honey are spun with vanilla ice cream and sandwiched between honey graham crackers.

François Payard, whose five payard New York patisseries, known for their French macaroons, are breaking tradition this summer and turning them into mini ice cream sandwiches in flavors like strawberry cheesecake and strawberry pistachio sorbet.

To Pastaria in St. Louis, pastry chef Anne Croy taps into other trends for her ice cream sandwiches, like salted caramel, one of her two most popular flavors.

While flavors change daily, other favorites include Askinosie Chocolate, made with chocolate from a Missouri producer of the same name, and Toasted Coconut, for which Croy adds toasted coconut to the milk and bakes it slowly in the oven at about 250° Fahrenheit for about eight hours. hours.

To The Optimist in Atlanta, Taria Camerino, creative director of the seaside fish camp-themed restaurant’s baking program, created her own take on the classic drumstick.

She fills a homemade waffle cone with dark chocolate fudge and vanilla ice cream, freezes it securely, dips it in creamy chocolate icing, and rolls it in fried salted peanuts. She calls it the Super Duper, which is also the name of a fishing lure, “so it fits in perfectly,” she said.

The Lodge of the Grands Cascades at Crystal Springs Resort in Hamburg, NJ, recently launched a new frozen dessert program with hand-held selections, including mini buns filled with blackberry sorbet, green apple sorbet and chocolate ice cream, as well than a pizzelle sandwich, made with a pizzelle wafer biscuits and pistachio ice cream. The sandwich is served with crushed pistachios, berries and edible flowers.